skip to main | skip to sidebar

As you may have noticed, I'm not publishing here very often. I've narrowed my posts down to the blogs that seem more relevant to me now,

If you like my writing style, please take a sec to check those places out. 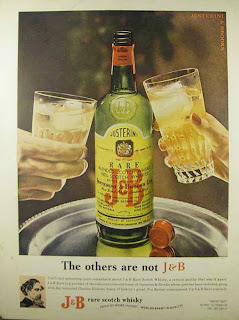 A funny look at ordering drinks that went out of style before most of us were born, at Tiki Lounge Talk.
Posted by Christopher Pinto at 5:22 PM No comments:

Beachbum Berry’s Rumposium at The Hukilau 2011 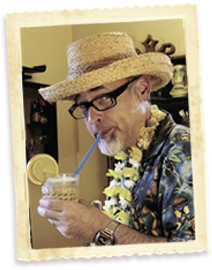 New Post at the Tiki Lounge: Beachbum Berry's Rumposium during The Hukilau 2011, at the Mai Kai, Fort Lauderdale, June 11

Beachbum Berry's Rumposium at The Hukilau 2011
Posted by Christopher Pinto at 5:20 PM No comments:

Your Weekend Cocktail: The Stinger

Your Weekend Cocktail: The Stinger
This week's tiki bar cocktail comes courtesy of Brandy...
Posted by Christopher Pinto at 6:43 PM No comments:

Interview with CRYSTOBAL, originator of the current trend in Vampire Killing Kits


A resurgence in the popularity of vampires as been in the works for many years now. Probably starting with Bram Stroker's Dracula, the 1992 box off ice hit starring Gary Oldman and Winona Ryder, the vampire craze has been gaining momentum through TV, books and movies to a point of pop-culture saturation. At the writing of this article, you can find on TV reruns of Buffy the Vampire Slayer, True Blood, Vampire Diaries, Angel, Behind Human, Moonlight, Sanctuary and Blood Ties...plus the movies of Twilight, Blade...the list goes on. Vampire lore is at an all time high in our pop culture...and one of the men who have ridden this wave for years...in fact, helped fuel the fires...is CRYSTOBAL, Gothic Artist.

I've had the pleasure of knowing CRYSTOBAL for many years, something not too many people can claim. He's something of a recluse, not showing himself in public much (at least not in the daylight.) He finally agreed to a short interview with me...I talked him into it over a bottle of Jameson...so here it is, the only known interview with CRYSTOBAL, father of the hand-made primitive style Vampire Killing Kit.

CP: Crystobal, I know you don't like to waste time, so let's get right to the point. Who is Crystobal?

CR: That's getting to the point? I guess so...I'm just a guy who likes to build things. I've been creating crazy stuff since I was a kid. I guess I'd have to say I'm part my father, who taught me how to build stuff, part my mother who taught me about art, and part my grandfather who was a fabricator and real jokester.

CP: You are credited with being the first person to start creating unique, replica Vampire Killing Kits. How did that start?

CR: When I was a kid my parents and I visited the Ripley's museum in St. Augustine. They had a real Vampire Killing Kit on display, something from the 1800s. It was the coolest thing I'd ever seen. My mother really liked it too, so my dad and I tried to build one. But it didn't look much like the real one. The real ones were painstakingly hand crafted, machined, etc. etc. The guys who built those old ones had a lot of time on their hands. A few years later I was making stage props for a dracula spoof that was playing onstage in Philly. All the stuff they used looked handmade, like stuff the villagers would have made themselves. That's when I got the idea to make a "primitive" style kit. Something that really looked like it was handmade by people who needed the thing to ward off vampires for real.

CP: When was that?

CR: Oh, hell, around 1955, 56 I think. I made that first kit out of an old box I found, wittled down sticks for stakes, added a couple of spice jars with holy water and garlic...it was pretty rough, but the actors liked it enough to use in their show.

CP: When did you start making them to sell?

CR: After that I made one for my mother, who had it for years. Friends would come over and it was a great conversation piece. Somewhere in the mid-60s one asked if he could get one made. I charged him $27 for materials and labor. It had a real flintlock pistol in it and cross made of sterling silver. His friends, who were all into the whole occult thing, asked me for some, and before I know it I'd gotten about ten orders by 1970.

CP: You say your kits were used in films and stage shows, too.

CR: Yeah, in the 70s when all those crazy vampire movies were being made...you know, the ones with Christopher Lee and all...a few production companies asked me to build custom kits for them. Don't know if any were ever actually used in the final films, but I got my money!

CP: You've done other works of art, too, correct?

CR: Sure. I worked for a couple of display companies over the years. Built props for haunted houses on the Jersey shore, parade floats, furniture, you name it.

CR: Nope. Met a lot of people over the years, and ain't all of them friends. Friends come and go, but enemies accumulate, if you know what I mean.

CP: I do! When did you first start selling your kits online?

CR: You would know that better than me, kid.

CP: Back in 2001, when you made my personal kit, I looked online to see if anyone else was making these. There weren't. Doing a search for "Vampire Killing Kit" only brought up the ones at Ripley's, and one that had been sold at auctions for some astronomical amount. No one else was creating replicas of any kind, which is why I suggested you try selling some on eBay.

CR: Yeah, that turned out to be a double-edged sword. We made good money on the kits we sold online, but it brought out a bunch of annoying copy-cats too.

CP: Tell us more about that.

CR: If you poke around now, almost 10 years after putting my first kit on eBay, you'll find at least four of five knuckle-heads out there who are claiming they "invented" this style of Vampire Killing Kit. Do you have any idea how annoying that is to me, as an artist and originator, to read that crap? Plus the hopheads are copying my style, right down to the same kinds of boxes I use, the coffin nails (here's a secret: They aren't coffin nails. They're masonry nails. I use them because they look old. Now everybody's copying that. They were never in the original kits)...they even copied the contents that I put in my kits, which is generally different from the originals. Plus of course the overall antique, handmade look...that's 100% me, Jack. These other creeps are copycats, saying they've created this style and have been doing it for years. Well, creeps, let's see one photo you have from the 1950s, or even the 70s...and not something doctored in photoshop, either.

CP: That's a real sore spot with you, isn't it?

CR: Imagine of some guy with half the talent of Picasso painted a bunch of squares on a canvas in a half-assed way then said he invented the style...wouldn't Picasso be pissed off?

CR: Hell yeah he would.

CP: Getting back to the kits. Why did you chose the elements you use, and have you ever strayed from the original design?

CR: Every kit strays from the original design. Every one is unique. Some may be similar in size and content, but never the same. The stuff  inside depends on the stuff I can get my hands on, and what mood strikes me. The real primitive kits have four stakes, made from saplings, a wooden cross, rosary, jar of garlic, bottle of holy water, old bible, candle, matches, coffin nails, a hammer and a knife. The more elaborate kits can contain silver chains, bottles of rock salt and consecrated earth, pistols with accoutrements, a compass, maps, communion wafers and more. I'm currently working on a "steampunk" style kit...something that I'm sure will be a hit, and will probably be copied up the ass.

CP: Does it really bother you when others steal your ideas?

CP: Well, hopefully anyone researching Vampire Killing Kits will find this article and learn the difference before the buy.

CP: Now, you're not exactly a kid anymore. How much longer do you think you'll be able to make these kits?

CR: Thanks, nice question. I don't know. I've sure as hell slowed down over the years. It takes me four times as long to build a kit now than it did a few years ago. But there's more blood and guts in them now. More detail. Anyone buying one of my kits today is getting top quality stuff.

CP: Indeed, from what I've seen, no one else can come close to your quality and style with anything that is on the market today.

CP: Sure, there are some very well-constructed replicas of the original kits; at least one I've seen was completely hand built using a lathe to cut and make the box, inserts etc, and is filled with antiques.

CR: Not my style. I couldn't do that. Mine are made the way a guy with the resources of your average 19th century peasant would have. Wood, nails, leather, a cheap saw.

CP: Yes, yours are certainly unique, and I must say the absolute best quality, most artistic kits available in this style.

CR: Thanks. Like I always say, any idiot can throw a bunch of stuff in a box. My kits are truly works of art.

CP: I agree. Is there anything else you would like to say?

CP: Well, a nice chilling end to the interview! Thank you Crystobal for joining me, and for all the info. I hope this lets your fans know a little more about you, and sets the record straight on your involvement with the Vampire Killing Kit craze!

I think this says it all...relevant silly pop culture reference tied into one of the most historic moments in America's history. The most serious of events tied in with the most absurd. But you have to admit, it is kind of funny.

By the way, you can't say I'm cashing in on two media bonanzas with my little photo here, since only about four people ever look at this blog. It'll just be fun if I see this on another blog or FB page somewhere in the near future :)

- "Tiki" Chris Pinto
Author of Murder Behind the Closet Door
and Murder on Tiki Island
Posted by Christopher Pinto at 1:48 PM No comments:

http://tikiloungetalk.com - My fun retro-tiki site, for anyone who wants to read about the retro good life. Lots of fun.

http://stardustmysteries.com - My writing/theater site. Info about my book, "Behind the Closet Door", pictures and stories from Star Dust Productions Theater, and the latest on my journey through the years as a mystery writer.